Cultural and social life in the village is a diverse range of celebrations and social events. It interweaves the customs and holidays of the traditional and ecclesiastical calendars (Carnival, May Sunday, Maya, Corpus Christi, Easter, Christmas) with modern occasions (Mother's Day, Juniáles, Month of Respect for the Elderly). Several village folklore groups and art circles are involved in the restoration and preservation of folk traditions, as well as the maintenance of newer holidays, in cooperation with the local Municipal Office, which supports and covers cultural events.
We first present the files separately. However, at the events of the village's cultural year, they can be seen and heard singing, making music, dancing and entertaining the village and themselves. Their activities in the village pulsate more dynamically during the holidays, life becomes more sensitive and when restoring archaic customs it breathes a unique and unrepeatable atmosphere. Her survival pulls a person out of the merry-go-round, emotionally enriches his life, as well as binds the community.
Here you will learn about the calendar traditional customs of our village, as well as about newer holidays in different seasons, through photographs. We wish you a pleasant walk through the Boleráz year…

My three kings we come to you, happy, we bring you health…

January 6, the end of the Christmas and New Year period, door-to-door patrols of boys in masks - Three Kings with Cuba.

FACHIANGES The
moving date, depending on the date of Easter, runs from the Three Kings to Ash Wednesday, which dates back 40 days before Easter, masked patrols around the village, associated with carnival entertainment on the Saturday before Ash Wednesday.

DEATH SUNDAY
Moving date, the week before May Sunday, bringing out, burning and heating Morena in a folk procession, farewell to winter.

A moving date, the week before Easter Sunday, the welcome of spring, door-to-door walks of girls in traditional costumes with a decorated blouse called "májik".

EASTER SUNDAY
Moving date, depending on the movement and phases of the moon, the first Sunday after the first full moon following the day of the vernal equinox - 21.3., Sunday after 40 days of fasting from Ash Wednesday, offering sacrificial gifts in traditional costumes during the solemn Holy Mass in the local church .

BUILDING MAY
April 30, building decorated trees - the so-called. "May", with the participation of folklore ensembles and local firefighters.

MAYING OF MAY
May 31, rolling of decorated trees - the so-called. "May", with the participation of folklore ensembles and local firefighters.

MOTHER'S DAY
May 2, the program of children of the Kindergarten, Elementary School and children's folklore ensembles and art circles for mothers and grandmothers.

GOD'S BODY
A moving date, depending on the date of Easter, the week after the Feast of the Assumption of the Holy Spirit, which is the 50th day after the Resurrection, the worship of the Sacrament of the Altar as a symbol of the Body of God

JUNIÁLES
June 3, entertainment on the occasion of the anniversary of individual village associations and organizations (firefighters, footballers, village anniversary,…), the end of the school year and the beginning of the summer holidays with fire and fireworks.

MARIÁN PILGRIMAGE IN TRSTÍN On
15 August, infantry processions from Boleráz to Trstín, celebration of the Assumption of the Virgin Mary, participation in the ceremonial transfer of her statue to the Church of the Virgin Mary in Trstínský hájička, offering sacrificial gifts in traditional costumes.

MARIAN'S PILGRIMAGE IN ŽAROŠICE (CZECH REPUBLIC)
Saturday, September 2, celebration of the Virgin Mary in Žarušice, so-called A miracle worker of Moravia, participating in the pilgrimage of her statue, offering sacrificial gifts.

Feast
On the feast of St. Michal, in honor of the position and consecration of the church, bringing sacrificial gifts in traditional costumes during the solemn Holy Mass in the local church, in the Church of St. Michala.

GENERAL KILLING
November, Saturday before Catherine's Day, demonstration of a traditional slaughterhouse with a tasting of slaughterhouse specialties, entertainment program.

MIKULÁŠ
on December 5, patrols of St. Nicholas masks, angels and devils around the village.
December, St. Nicholas program in the cultural house for children 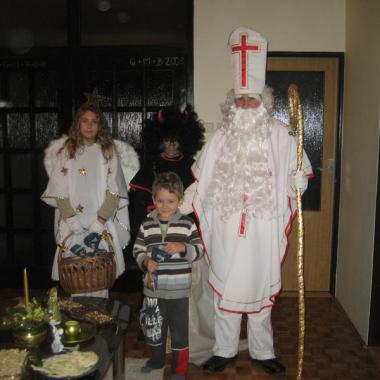 An integral part of social life is the existence of a diverse range of corporations, interest groups and later political parties or movements. We know from the canonical visitation of the parish of Bohdanovce that in 1782 the Brotherhood of St. František (Cordigerorum), whose members were also believers from Klčovian. It was led by the Franciscans of Trnava and its mission was to pray for the sick. In 1870, one of the most important national, cultural-social and religious-educational institutions was established - the Society of St. Vojtech in Trnava . With his ideals, he continued the traditions of the Slovak learned society, which was established in 1792.
Already in the years 1780 - 1781, Štefan Waymár-farár was a member of the SSV of Boleráz. They registered Štefan Nemeck and the Čižmár companion Michal Hucovič from Klčovian. The membership of the Association of St. Vojtěch z Bolerázu was expanded in 1885 by Peter Čavara, 1887 Andrej Ostatník, 1894 Rozália Danišovičová-Černá, Štefan Daniš, Andrej Gašparovič, Rudolf Krištofík, Imrich Miškovič, Róchus Nemček Jr., Anna Špačinská (nee Danišová), Pavlína Špačinová (born Radakov ), 1899 Anna Čavarová (nee Jakubcová), Martin Ostradický, 1900 Pavol Jakubec, 1905 Jozef Dusík, Alexander Danisovič, Anna Vadovičová, 1910 Martin Bittarovský, 1914 Štefan Bošnák and in 1915 Štefan Černý, Jozef Daniš and Anna Duchalová became members of the SSV . This list is not exhaustive for those years. These are mostly the names of new members in the federal calendars. In 1930, the Boleráz office (which included Klčovany) had 122 members and the managing director was Jozef Barčák. The local group of the Association of St. As of December 20, 1993, Vojtech in Boleráz had 32 members and Alojz Belica was a confidant.

The following worked in Boleráza:

A group of Czechoslovak war victims - founded in 1925.

The unit of the Czechoslovak Eagle , was established on October 9, 1921 and ceased to exist in 1933. It was revived in 1935. The mayor was Dominik Čavara, deputy. mayor František Danišovič, educator Jozef Urge, executive Alexander Zachar, chief Emil Kormúth and treasurer Štefan Miklošovič. This unity disappeared in 1938.

The Christian Peasant Association was established on January 12, 1927, and ceased to exist in 1933.

Association of Christian Farmers , founded in 1920; after a short exposure it disappeared.

The choir of the Slovak League was founded on October 28, 1938. The chairman became Štefan Madygan, the vice-chairman Jaroslav Višek, the executive František Pinček.

The group of the Association of Archery Workers in the Czechoslovak Republic was established on December 10, 1933. Its board of directors presented: Blažej Daniš-chairman, Peter Pobiecky-vice-chairman, Martin Pinkas-executive. It disappeared in 1939.

Existence of the Ochotnícký Theater Theater - branch no. 282 in Boleráz dates from February 25, 1933. The initiator and first chairman was Anton Dusík, vice-chairman Blažej Daniš and executive Alojz Kormúth. In 1921, the Catholic Unity began to operate here. In the mid-1930s, the presidency was held by the pastor Jozef Urge, and the executive was Terézia Slobodová.

The post-war years in the political sphere were symbolized by the Democratic and Communist Parties. After February 1948 until 1989 only KS.

From associations and associations operating in Klčovany:
Roľnícka beseda was established on May 21, 1920. In the 1930s, Pavol Petranský was the chairman, Jozef Lančarič, deputy, Michal Galgóci, managing director, and Jozef Izákovič, treasurer.

Slovak league branch no. 105 have been registered since 1926. The purpose of the association was to raise awareness and support the Slovak education system.

According to Gerváza Belica's memoirs, the association had a white-blue-red battalion since its foundation, on which its full name was embroidered with yellow thread. In addition, there was a black, so-called. posthumous. He was consecrated in 1937. If one member of the association died, the others attended the funeral. In a mourning procession, a black battalion carried in front of the coffin, and a farewell speech was delivered over the open grave.
In addition to attending meetings, membership obligations included paying contributions. In the past, it amounted to 3 crowns per month, ie 36 per year. Upon death of the member, the survivors received a one-time financial support from the association. Originally it was 1500 crowns, in the first post-war years 3000 crowns. At the establishment of the membership base united about 30 candidates, at the abolition of July 29, 1952, it was 176 members.

Change in appearance, Structure of pages, RSS, print out